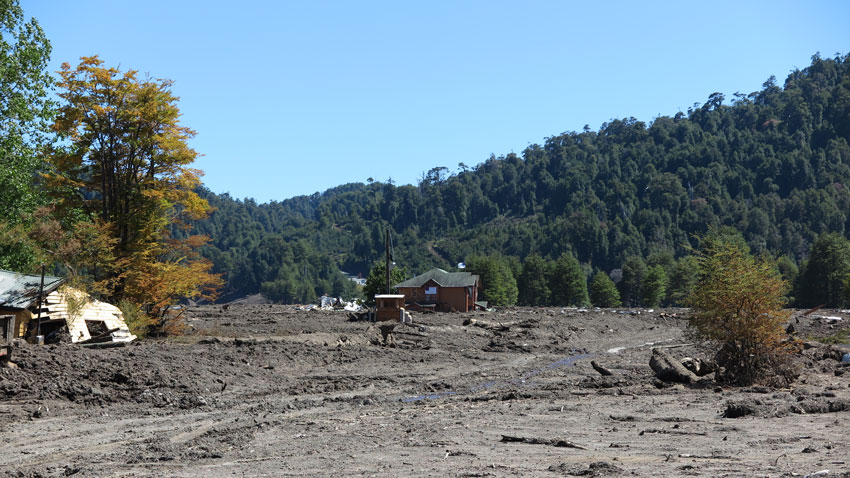 Three days ago I passed through Villa Santa Lucia, known worldwide for the tragedy that happened on December 16th, 2017. Between 9-10AM, half of a mountain near by collapsed, making a torrent of water and mud that destroyed half the village and left 18 dead and still 4 disappeared.

The pain is palpable in the environment. A dark silence, disturbing. Also the smell of mud, very particular. A natural disaster of these characteristics has a destructive capacity difficult to imagine. The Carretera Austral is cut at this point, and it will take months to open.

I had the chance to talk with a couple of survivors of the catastrophe. For ethical reasons I will not disclose their names, but indicate that they are about 60-65 years old. “It happened so fast that many people could not even react. My husband was dragged two streets inside the house. Miraculously he was able to leave. I went crazy, because I thought he was dead.”

The couple had accommodation cabins, which was what they lived on. “We have lost a lifetime, and our small business. We have nothing left. We are hosted by a neighbor. A whole life lost in a few moments… although the biggest of our luck is to stay alive.” The greatest of our assets, the fact of being alive, and that often goes unnoticed in our lives at full speed.

“The luck is that there was no school that day, because it was located right at the entrance to the village. All the children would have died and the catastrophe would have been much bigger.”

Finally, the lady sends me a very strong message: “Enjoy the life, and do not cling too much to the material things.”

I’m still shocked, and I’ll follow it for a while.